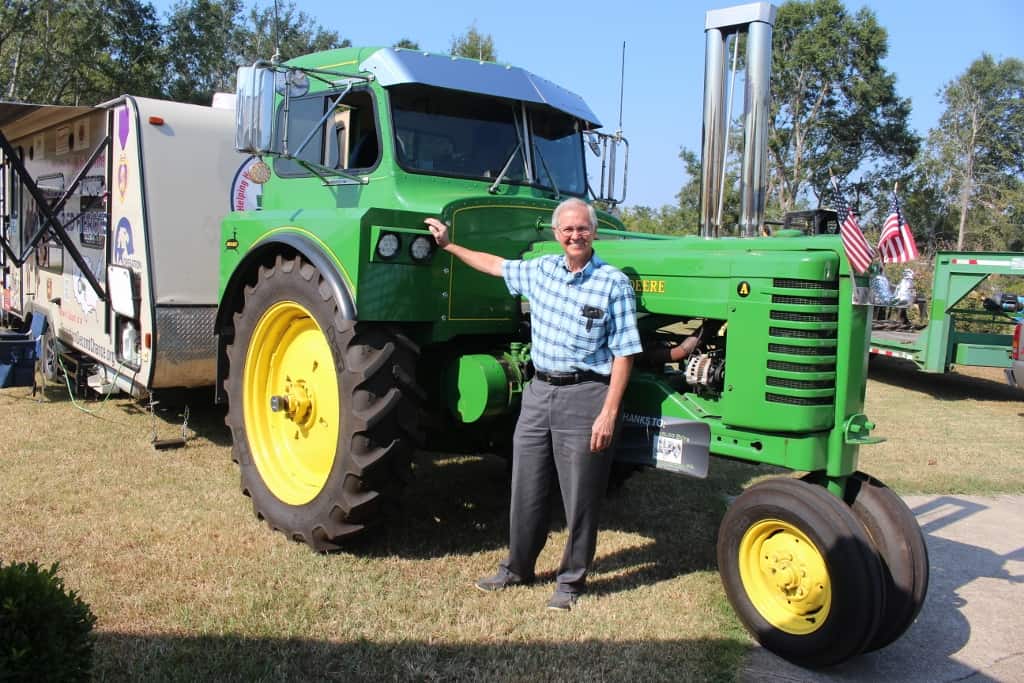 Saturday morning, I had my cup of coffee outside and Dr Bondage invited me along to a local restaurant his brothers and sisters gather every Saturday morning.

Had a nice visit with them and then we took a drive to see his development he is working on and we brought along his tractor and trailer along home. We stopped in at his brother’s place to see his deer and hunting preserve. I was excited. He gave me a box of antlers so I can make an antler dining room light for our cabin.

A big Thank You and it was great spending time with Dr. Laden and Linda Bontrager but it was time to move on. They were so gracious to put up with me and hope I can repay them sometime when they come to Sarasota. Picture of DR. Bontrager standing by Johnabilt.

I was on the road soon after day break. It was good traveling on a Sunday morning and I only had 40 miles to Tallahassee so I took my time and arrived at Lake Side Travel RV Park by 11 am.

You might be asking why we are here so early. Back while I was going through Texas, into Mississippi, they kept showing all these hurricanes that might come up the Gulf, and I decided I would like to be closer to Tallahassee or in Tallahassee rather down along the Gulf after seeing what Hurricane Michael did.

I took a rest and realized there was a Wal-Mart and an Applebee’s only half a mile down the road, so I was able to get a warm meal.

After doing a load of wash, I walked by this sign and decided, I guess I won’t be going swimming today!

I got up early and washed my rig before anyone else got up.

Some of the OSC members are here already preparing for our event on Thursday evening Oct 3rd.

Vanessa’s is picking me up at 3:00 pm and we are meeting with the local news this afternoon.

I met Joe, who will be escorting me on Thursday with other Patriot Guards riders, 7 miles to the Hooch beside the American Legion.   Vanessa came to pick me up and only when she drove to my campsite, did I realize this is not the Vanessa that I knew from MD who is part of OSC. There are two Vanessa’s and both are part of OSC.

We had a chuckle over that and we drove back to the local TV station for an interview and there I met Luke Murphy who is a wounded Veteran. I felt we had a good interview and we got to plan our event Thursday.

I was dropped off at my campsite and ended up riding Smiley back up to Applebee’s  for dinner.