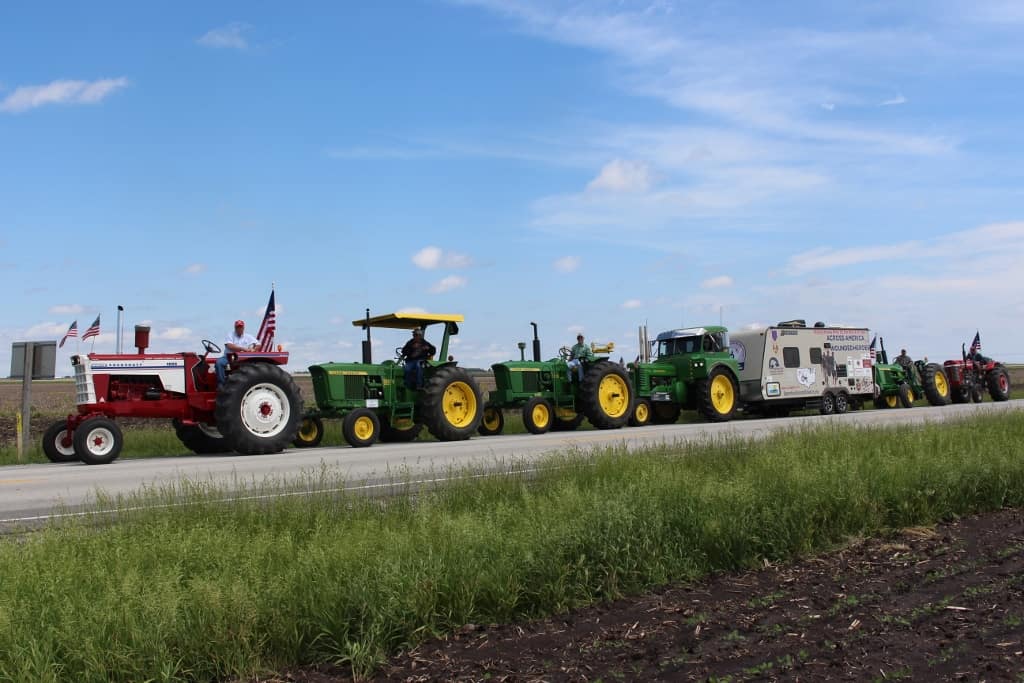 I took off from my campground and headed south to Penfield at the I & I Antique Tractor & Gas Engine Club, it wasn’t  long after that local people and my friends from Arthur, IL,  arrived.  They had an hour and a half of driving and trailering their tractors up. Everyone was standing around and sharing stories about their tractors and a lot of club members came out to support.

Chanel 3 came out from Champagne, IL,  to interview us and take video’s of our convoy putting down the highway.  Well, let me clarify that, I was the only one putting, the rest of the gang had newer tractors and they were purring. Erin (the reporter) was a lot of fun and I think she enjoyed filming us country boys.

It was cloudy but no rain. All the other guys had open tractors I was the only one with a cab. There were a lot of people along the road waving and taking pictures.

I got a call from Andrew from Operation Second Chance, Sinclair Broadcasting Group from Champagne, IL, want to come out and film. Andrew did a great job making the contacts. When he called I got the convoy to pull over and we were able to make the arrangement to meet up with the reporter in the next town.

Coming down to Arthur, IL,  some of the wives and friends were standing waving flags welcoming the group home. Fred was in his rare red and white Cockshutt tractor. The reporter interviewed Fred, since he set the convoy up.  Fred and the rest of the guys have been very supportive of our mission.

It was a fun day and the traffic was light. I had tractors in front of me and more tractors following bring up the rear. Fred Helmuth was the lead man then Ervin Kuhn, Harold McQueen, Johnabilt, Floyd Miller and Levi Beachy.

They had a lot of rain in this area. At one point I wanted to get pictures of the convoy. I walked out in the field and just about got stuck. The soil is very sticky when it’s wet. Fred made a comment he thinks that when the farmer sees the tracks in his fields he will think big foot was here. Funny guy.

I wanted to mention that you can see the tire pressure on my wind shield. Andrew suggested that I get it and it is very handy. When my camper tires get low,  it pulls harder so I can keep track of the pressure on all 4 tires. Game changer for me!