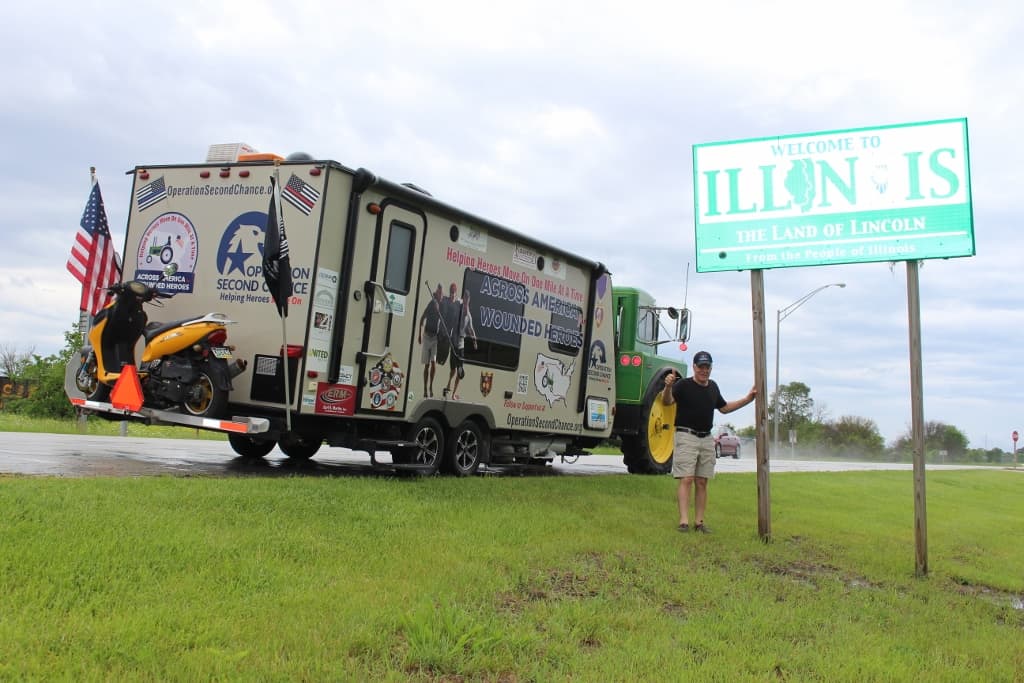 I left my campsite around 7am in Winamac, IN, on RT 35 south and then got on RT 14 west to RT 421 south. I came to a small town called  Francesville, and that’s when I saw that a car went around me and stopped. He was flagging me down, so I stopped. He said, “I have been following and saw you on Fox and Friends. I wanted to tell you there is a bridge out and you can’t continue on RT 421.” He said, “follow me and I will show you where RT 16 west is. It’s not marked as RT16,  that will take you west to RT 41.”  Everyone is so nice  and willing to help. He is a Veteran was glad to sign our book and he gave a donation.
It’s pretty neat, about every town I go through there are people out waving and cheering, cars passing me and coming toward me waving and tooting the horn. I am filled with emotion. This is the America I know and love.
I stopped in at a gas station for a cup of coffee soon there were more people stopping and taking pictures and making some donations.
It was a peaceful drive this morning through the country and very little traffic. I arrived at the IL state border and had to take some pictures. Soon a pick up pulls up and says he is a Veteran and he thanked us and took the pictures for me.
I putted on to the town of Watseka, IL, and called the American Legion and asked about camping over night two nights and they were delighted.
As I putted in I was still seeing a lot of big machinery sitting outside because it is still to wet to plant.
Before I came to the American Legion I stopped in at Walmart along RT 24 and got some supplies and came out and there and there were three pick ups  waiting for me. One Gentleman said I remember you from 5 years ago when you came through and I filled your tractor up with gas and I want to do that again I will be out tomorrow.
I putted another 5 miles and drove in to the American Legion and they found a spot for me on the concrete.  They are calling for rain tomorrow and they might be having the Memorial service inside. While I was at WalMart I made a hair cut appointment, for a Blue Light Special. This will be interesting. When I got back, I hopped on Smiley to go get that Blue Light Special. Wouldn’t you know, that now I will have to keep my hat on for the next 4 weeks because they cut it really short.
Last time the American Legion set me up out in the yard but, they’re calling for more rain, so they have me set up beside their shop adorned  with Port a John and all.
The last two days were very busy even after I got to the camp site last night I was getting knocks on the door, long after I was already in bed. I said to myself, the one time I will be there, I need to get dressed, hoping they would take the hint but they said we will wait. Ha Ha
For now, it is nice to have a break.  It’s quiet and I can rest up tonight.