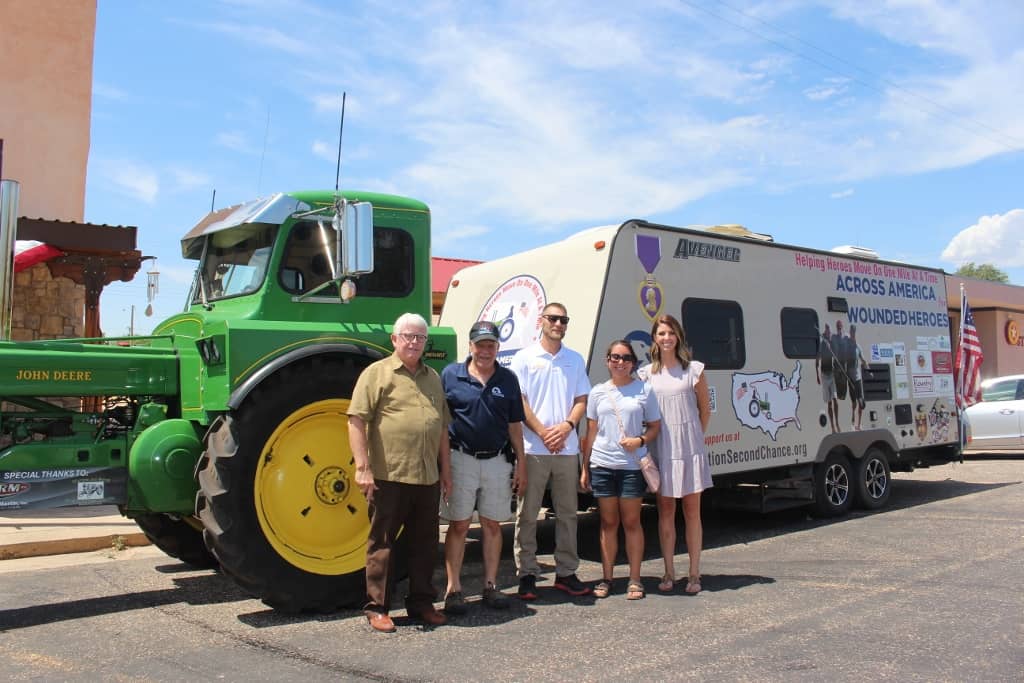 Left Canyon, TX, at daylight and ran the service road along interstate 27. I love this road, it’s smooth and no traffic. I only had two cars pass me the first 30 miles.

I like to leave early before it gets real hot.

After driving for two hours I pulled off to pack some snacks back in the camper. As I came out, a Jeep stopped. The guy walked back and handed me a nice donation. He said he wasn’t in the Military but heard about me on the local news and wanted to contribute.

I arrived in Silverton, TX, around 12:30 pm and I stopped for gas before I headed for my campsite. I noticed folks drove in got out of their cars and walked over and said we knew you were coming through town, I ask how did you know that,  and they replied, “We heard it on the news and they announced it at church.” Wow, now that was the first I heard that. They announced it at church! Praise God!

I called the campsite yesterday to make a reservation and told them how I was traveling and she said, “Oh you are the one we heard about on the news.”  This news excited me, that we were making news even at Church.

I drove a block to my campsite and the gentleman said to find your spot there will be no charge and by the way the town Mayor already has something planned for you up town at 2pm. The  Mayor and the town Judge will be there and people from the community.

Well I was looking forward turning in and taking a nap it’s been hot and I am tired. I just wanted to lay down.

I told them I will come up with the rig at 2. I thought maybe I could lay down for a short nap but no, here they came one truck after another. I soon had a number of people outside. I had to go out and talk to them they were excited to see this THING that was coming through their town.

They wanted to know about Johnabilt. Some left and the camp owner and one other was still visiting. I said I am going inside. It wasn’t long and here comes some more people. Gary the camp owner was enjoying himself explaining our mission and Johnabilt and he was doing a great job, I could hear him. I did go back out after some more came. I am thinking why don’t you wait till I come up town.

At 2:00 I putted up town and parked in front of an antique store. They had drink and food and were planning on me coming up.

They asked me to talk about our mission and the trip. They had a lot of questions and we had a good time even though I wanted to sleep.

I was glad it worked out. It was nice of them planning an event. I was wondering how they knew when I would be here but, then I remembered she asked me yesterday and I said I was hoping early afternoon.

I spent an hour there. Came back and wasn’t more than hooked up here comes another truck. The driver said he didn’t make it up town so he wanted to hear about our trip.

I finally got inside a little exhausted it’s a 105 degrees today.

I like leaving early. I really didn’t need to turn on the air condition until 11 am.

I took my jug along in for funds and folks were donating.